Charlotte ranks among the hottest real estate markets in the U.S., following a multi-year trend of developers and investors focusing on Sun Belt cities like Charlotte for economic growth potential. According to a report from the Charlotte Observer, Charlotte is an 18-hour magnet city, with its population and job market growth making the city a migration destination for people and business.

Charlotte, North Carolina is the most populated city in the state and one of the fastest-growing metro areas in the U.S. The diverse economy and quality of life in Charlotte helps to explain why the housing market is so hot. The Charlotte metro area is the second-largest financial center in the U.S., home to popular pro sports teams, and has one of the best year-round climates in the country.

In this article we’ll discuss why Charlotte is worth considering to invest in the next year and beyond. But first, let’s take a look at some of the factors driving the real estate market in the Charlotte metropolitan area.

Charlotte is among the fastest-growing cities in the country, with New Yorkers topping the list of new residents coming in.

As Fox 46 reports, the Charlotte metro area is growing by thousands of new residents each year. In fact, according to the most recent census, the population of the city of Charlotte increased by nearly 20% over the past decade, more than double the growth rate in the state.

With nearly 875,000 people in the City of Charlotte and over 2.6 million residents in the metropolitan area, Charlotte and Mecklenburg County have ranked near the top for population growth in the U.S. A job market that is quickly recovering and increased diversification are just two of the many reasons why so many people and businesses are moving to Charlotte.

Charlotte saw nearly 4,700 announced new jobs in Q1 2022 and nearly $2.2 billion in planned capital investment, according to the Charlotte Regional Business Alliance. Through 2028, North Carolina forecasts 300,000 new jobs, most of which will be created in Charlotte and nearby Raleigh.

The metro area is home to seven Fortune 500 companies and the country’s 2nd-largest banking center after Wall Street. Charlotte’s job market is super-charged with a high-octane blend of high-tech, white collar, and service and distribution jobs. In fact, Concord, a small suburban city in the Charlotte metro area, recently ranked as one of the top 20 fastest-growing economies in the U.S. 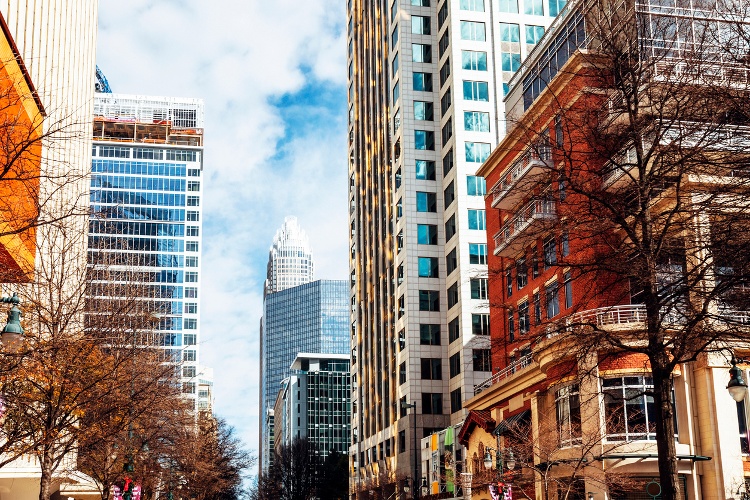 Home prices in Charlotte are predicted to rise by 5.6% in 2022, while sales volume is expected to grow by 9.9%, according to Realtor.com’s national housing forecast. Last year, Charlotte was ranked as one of the best real estate markets in 2021 by WalletHub, and the best housing market in the Southeast in 2021 by Realtor.com.

Fast rising home prices and an influx of investors buying up houses and turning them into rental properties in Charlotte are making it more difficult for young people and lower-income buyers to purchase a home. In fact, over the last several years, surging population and the boom in high-tech and professional services jobs have helped to rank Charlotte as one of the best markets for real estate investors and developers.

Researching historical price changes and measuring the affordability of housing are two of the many metrics rental property investors use to determine the past, current, and future demand for rental real estate in Charlotte.

According to Freddie Mac’s monthly Home Price Index (FMHPI) report, home prices in the Charlotte-Concord-Gastonia MSA have grown by nearly 83% over the past five years:

The quality of life in Charlotte makes it the perfect place to live, work, and play for most people.

During a recent economic update presentation, Mecklenburg County (where Charlotte is located) listed nearly a dozen #1 reasons why Charlotte and North Carolina are booming.

Where to begin your search? Roofstock created a heat map of Charlotte based on our Neighborhood Rating, a dynamic algorithm that enables you to make informed investment decisions by measuring school district quality, home values, employment rates, income levels and other vital investment criteria.

Ready to invest in the Charlotte market? If you haven't already done so, create your free Roofstock account and set up alerts. We'll notify you when we have a Charlotte investment property that matches your search criteria.