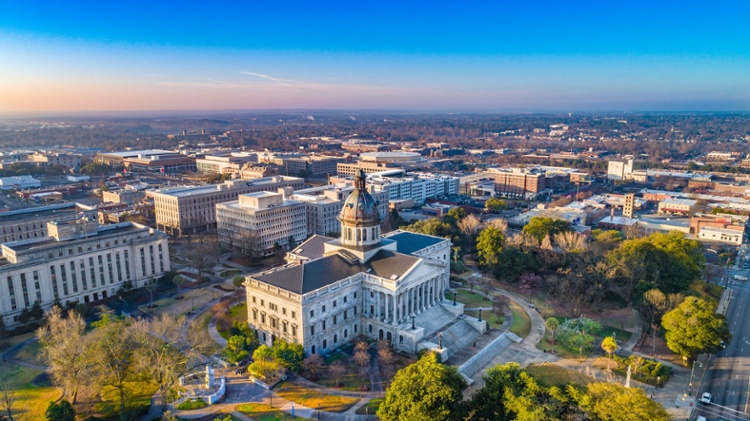 More than 50% of the households in Columbia rent rather than own, which is one of the reasons WalletHub lists Columbia as one of the best cities for renters.

The most recent Market Indicators report from the Central Carolina Realtors Association (January 2022) notes that competition in the market remains fierce, with inventory levels the lowest at the lowest point since 1999. Median home sales prices have increased by 24.4% year-over-year, while inventory is down by more than 25% over the past 12 months.

The Columbia metro area consistently sees strong demand for rental property from a variety of tenant types, including the military, students, and retirees.

In addition to education and the military, the diversified economy and job market in Columbia are driven by the healthcare, technology, transportation and logistics, manufacturing, and financial services sectors.

Keep reading to learn why there's demand for rental property in Columbia in 2022.

Moving forward, employers should continue to be attracted by the region’s well educated workforce and low cost of doing business. People keep coming to Columbia because of the job opportunities, low cost of living, and high quality of life.

Columbia expects to see more business and residential growth in the upcoming years, according to a report from WLTX News 19. As the city’s Director of Economic Development notes, "I think what we've seen over the past decade does tell us that Columbia is an attractive market, and developers, and investors, and companies are interested in being here."

As the economy in Columbia continues to recover, the BLS reports that employment sectors showing the fastest signs of growth include manufacturing, trade and transportation, financial activities, and leisure and hospitality.

Nearly 43% of the residents in the Columbia metro area hold a bachelor’s degree or higher. In fact, Columbia ranks 23rd in the nation for holders of doctoral degrees and 32nd for holders of college degrees.

The Columbia real estate market was “famously hot” in 2021, with buyers scrambling and sellers in the money. This year, buyers may expect more of the same.

According to the 2022 National Housing Forecast from Realtor.com, home prices in the Columbia metro area are forecast to grow by 5.1% while sales volumes increase by 6.4%. Cost of living and taxes are low, and median home prices in Columbia are well below the national median.

Although housing is relatively affordable in Columbia, there simply isn’t enough inventory to meet demand. The imbalance between supply and demand is one likely reason why more than 50% of the households in Columbia rent rather than own.

In fact, WalletHub recently listed Columbia among one of the best cities for renters, based on key investment criteria including activity in the rental market, affordability of rents, and quality of life.

Rental property investors in Columbia also benefit from the various demographic segments driving demand for rental housing, including the military from Fort Jackson Army Base and the National Guard, students from the University of South Carolina, and retirees drawn to the low cost of living and great climate.

Rental property investors conduct a variety of financial analysis to determine which real estate markets to invest in. Two of the key data trends to review are the historic change in housing prices and the affordability of housing in a specific market.

Tracking the change in housing prices over the long term may indicate the potential for future appreciation, while housing affordability is one indicator of how strong the demand for rental property might be.

Generally speaking, markets where houses are relatively affordable see more homeowners than renters. However, the exact opposite is true in Columbia, where more than 50% of the households are occupied by renters. Reasons why more people rent than own here include a shortage of affordable housing and the strong demand for rental property from a variety of renter segments.

Each month Freddie Mac publishes the House Price Index (FMHPI) report with up-to-date data on the change in home prices for all markets across the U.S. The most recent FMHPI report for the Columbia, SC MSA shows:

The housing affordability index (HAI) is another statistic real estate investors review to determine the potential demand for rental property.

The most recent housing affordability report from Kiplinger’s Personal Finance surveyed home prices in the 100 largest metro areas in the country. The survey uses an affordability scale of 1 to 10, with 1 being the more affordable market to buy a home in and 10 being the least affordable.

Columbia is a city that mixes traditional Southern hospitality and tradition with today’s fresh perspectives. The city is a creative and tech hub fueled by the University, nearby military facilities, and the capital city community.

Where to begin your search? Roofstock created a heat map of Columbia based on our Neighborhood Rating, a dynamic algorithm that enables you to make informed investment decisions by measuring school district quality, home values, employment rates, income levels and other vital investment criteria.

Ready to invest in the Columbia housing market? If you haven't already done so, create your free Roofstock account and set up alerts. We'll notify you when we have a Columbia investment property that matches your search criteria.