The Dallas real estate market: Stats and trends for 2022

Home prices in Dallas and the rest of North Texas show no sign of moderating. Median-priced homes sold for a record $335,000 in March 2022, representing a gain of 19% year over year. According to The Real Deal, the market is not but not overheated, due to the area’s rental market, rising incomes, and decreasing unemployment.

An above-average population of millennials, robust in-bound population growth, and a thriving economy are just three of the many reasons why the Dallas real estate market and demand for rental property are increasing.

Real estate investors love Dallas, and it’s easy to see why. It’s got something for everyone: jobs and big-city excitement, quaint suburbs, and warm climate and quality of life.

Dallas is one of the most recognizable and buzzworthy metropolitan areas in the U.S. — if not the world — and is considered a quasi-gateway city for investors looking for dependable, liquid real estate environments. Fortunately, despite its popularity and skyrocketing growth, Dallas is still an accessible market with lots of upside.

We looked closely at the numbers to get a clearer picture of what makes this North Texas metropolis such a shining star.

Here are several key reasons why Big D could be a prime location to consider for your next rental property.

The population of the Dallas-Fort Worth area keeps swelling, and is now the 4th largest metro area in the country, up from 6th place in 2010. In fact, DFW was only one of three metros to gain at least 1.2 million residents since 2010, along with Houston and NYC.

While many other parts of the country are still struggling to recover, Dallas is still a job hub. As The Dallas Morning News reports, Dallas is undergoing a “Texas-size” recovery, adding nearly 276,000 new jobs between February 2021 and February 2022. Employment in Dallas grew by 7.4% compared to the national average of 4.9%.

There are a number of reasons why Dallas scores high in top leading labor indicators such as net migration, college degree holders, job gains and growth, and working age population growth.

Dallas is ranked by the National Association of Realtors (NAR) as one of the top 10 markets in a post-pandemic environment in 2021-2022. Looking at the recent housing statistics, it’s easy to understand why. According to the most recent report from the Texas Real Estate Research Center (May 2022), single-family home prices increased by over 22% year-over-year, while months inventory increased from a 1.0 to 1.2 months supply.

Home prices are rising in most Dallas neighborhoods, creating one of the hottest home markets in North Texas.

As the Dallas News recently reported, low mortgage rates and feverish demand from in-state buyers and remote real estate investors are pushing home prices up by 50% in some of the most popular neighborhoods in Dallas. High home prices in Dallas, along with a growing population and thriving job market are three of the reasons why demand for rental property in Dallas should remain robust in 2022.

With so many housing markets in the U.S. it can be difficult for real estate investors to choose the best cities for single-family renters.

Two data sets experienced rental property owners use are historic home price changes and housing affordability. Price increases over time increase home values and equity, while the affordability of housing is an indicator of how good a city like Dallas is for single-family rentals.

The most recent FMHPI from Freddie for the Dallas-Fort Worth-Arlington, TX MSA reveals:

Real estate prices in Dallas are still surprisingly affordable, the job market is robust, cost of living is low, and there’s an amazing culture scene. Add to this the fact that Texas has no state income or inheritance tax, and it’s easy to understand why so many people and businesses are moving to Dallas.

Where to begin your search? Roofstock created a heat map of Dallas based on our Neighborhood Rating, a dynamic algorithm that enables you to make informed investment decisions by measuring school district quality, home values, employment rates, income levels and other vital investment criteria. 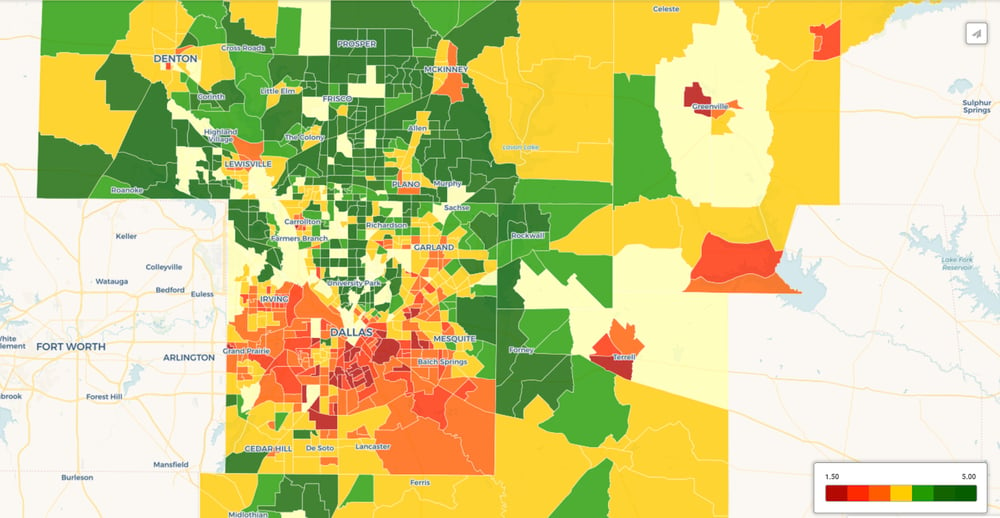 Ready to invest in the Dallas market? Start by creating your free Roofstock account. We'll notify you when we have a Dallas investment property that matches your search criteria.