The Detroit real estate market: Stats and trends for 2022

Although things have begun to cool off a bit, the metro Detroit real estate market is still hot for sellers and frustrating for homebuyers trying to compete with investors. As WXYZ Detroit reports, buyers have to come looking at a home with checkbook in hand. Inventory is still at record lows and the number of people looking to buy remains high.

The Motor City has been fabled in song and story for its innovation and work ethic, yet the decline of the domestic auto industry and the devastating effects of 2008 had some questioning whether Detroit could make a comeback.

The verdict? Detroit real estate investing has attracted many new investors, especially those who know where to look and prioritize quality property management.

With high-end retailers like Whole Foods moving in, and high tech stalwarts like Microsoft, Google, and Pinterest opening offices, Detroit’s future is looking bright. That’s good news for the housing industry and good news for investors.

We crunched the numbers to bring you a clearer picture of the upsides and challenges of investing in the Detroit real estate market in 2022.

Although the population of Detroit has been slightly declining, the city is seeing an influx of new people.

The 11-county Detroit region is home to more than 300 municipalities and 300,000 businesses, including 11 Fortune 500 companies and numerous educational institutions. As the Detroit Chamber reports, metropolitan Detroit is home to robust technology infrastructure and a workforce recognized around the world for its skills, expertise, and productivity.

The Metro Detroit housing market continues to boom, with soaring demand and record-high prices despite rising interest rates. Prices are still attractively low, with the median listing price of a single-family home well below $100,000.

Opportunistic real estate investors may find Detroit the perfect market to acquire very affordable rental housing for all cash, then refinance at a later date. As The Wall Street Journal has reported, lack of credit is making it hard for local residents to buy a home. That may be one reason why almost half of the households in Detroit rent rather than own.

It appears that there’s no end in sight to the “crazy” housing market in Detroit, with the market favoring sellers for several years in a row. According to WXYZ News, many new homes are snatched up the weekend that they are listed, which may be one reason why more than 40% of the households in Detroit are occupied by renters.

Two of the best ways for forecasting the potential returns of investment real estate over the long-term is by analyzing the historic change in home prices and the affordability of housing in a specific market.

The increase in home prices is an indication of potential value appreciation, while housing affordability is an indicator of the potential demand for rental property in Detroit and other real estate markets.

The most recent FMHPI from Freddie for the Detroit-Warren-Dearborn, MI MSA reveals:

Many real estate investors are surprised to learn that Detroit has been experiencing a renaissance over the last few years. New housing and businesses in the city’s Midtown, Downtown, and New District areas are attracting residents and visitors. People are attracted to Detroit by the low cost of living, affordable rentals, and vibrant neighborhoods.

Where to begin your search? Roofstock created a heat map of Detroit based on our Neighborhood Rating, a dynamic algorithm that enables you to make informed investment decisions by measuring school district quality, home values, employment rates, income levels and other vital investment criteria. 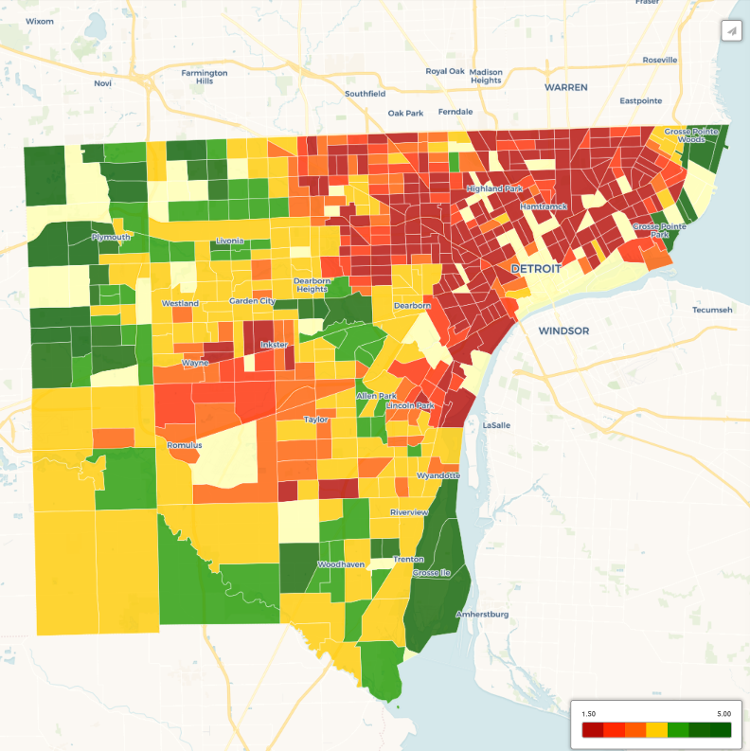 Ready to invest in the Detroit housing market? If you haven't already done so, create your free Roofstock account and set up alerts. We'll notify you when we have an Detroit investment property that matches your search criteria.