The Gary, IN Real Estate Market: What Investors Should Know For 2020

One of the fastest-growing housing markets in the U.S. is Northwest Indiana, home to the Gary real estate market. In fact, the Gary metro area is quickly becoming a popular suburb of Chicago because of the short driving distance to the Windy City, low tax base, and extremely affordable homes.

Gary, Indiana is located in Lake County along the southern border of Lake Michigan and only 25 miles from the Downtown Chicago Loop.

Hometown to Michael Jackson and The Jackson Five, the city was once renowned for its steel mills. While steel and manufacturing are still big business in Gary, the city is diversifying its economy to include the service and tourism industries.

Keep reading to learn more about what the Gary real estate market will look like in 2020.

Many counties in Indiana are projected to decline in population as more people move from rural to urban areas, creating long-term population growth in Gary. Lake County (where Gary is located) is among the top Indiana counties expected to gain residents over the next few years.

The new $400 million Hard Rock Casino project in Gary will help drive the economy and boost new development along the I-80/I-94 interstate corridor between Lake County, Indiana and Illinois, according to the Chicago Tribune.

With more than 1,000 high-paying construction jobs and 1,800 permanent jobs, the project will serve as a “significant catalyst for the continued economic revitalization of Northwest Indiana and the City of Gary.”

A recent article in Forbes discussed “How Best To Invest In Real Estate In The Midwest”. Gary – along with larger cities such as Fort Wayne, Indianapolis, and South Bend - was listed as one of the best areas for real estate investment due to established demand.

Forbes suggested investors move quickly before the bargains are gone, noting that single-family rentals requiring minor improvements are the best bet. Real estate investors should also take note that property taxes on rental real estate in Indiana are capped at 2% of the assessed value.

For the time being, Gary is one of the few areas of Indiana that isn’t experiencing a housing shortage, according to a recent article in the Tribune-Star. Currently there are homes on the market in need of redevelopment and repair, and the city is offering a variety of home improvement assistance programs to provide safe and affordable housing.

Available inventory and a motivated local government could spell opportunity for single-family investors with a long term buy-and-hold strategy in Gary, Indiana. Especially since the Gary metro area is quickly becoming known as an affordable suburb just outside of Chicago.

Price changes and affordability are two data sets that real estate investors can use to help predict the potential profitability of investing in rental property in a specific market.

Historic price changes are an indication of possible future property appreciation, while housing affordability is an indicator of the demand for rental property compared to owner-occupied housing.

The Federal Housing Administration (FHA) publishes a quarterly report showing the most recent short-term and long-term historical price trends in all markets across the U.S.

The National Association of Realtors (NAR) publishes a Housing Affordability Index report (HAI) that measures the median family income needed to qualify for a conventional mortgage (assuming a 20% down payment) compared to the median price of a single-family resale home in the market.

The NAR uses 100 as a housing affordability index baseline number. The greater a market’s HAI is above 100, the more affordable it is to own a home, and vice versa.

Based on the NAR’s report, the HAI for the Gary-Hammond MSA is 214.7. This means that the median family has more than twice the income needed to purchase a median-priced home.

Gary is right next to the Indiana Dunes National Lakeshore and borders Lake Michigan. Housing is affordable, the cost of living is low, and the city is located about 25 miles from the Chicago Loop.

Where to begin your search? Roofstock created a heat map of Gary based on our Neighborhood Rating, a dynamic algorithm that enables you to make informed investment decisions by measuring school district quality, home values, employment rates, income levels and other vital investment criteria. 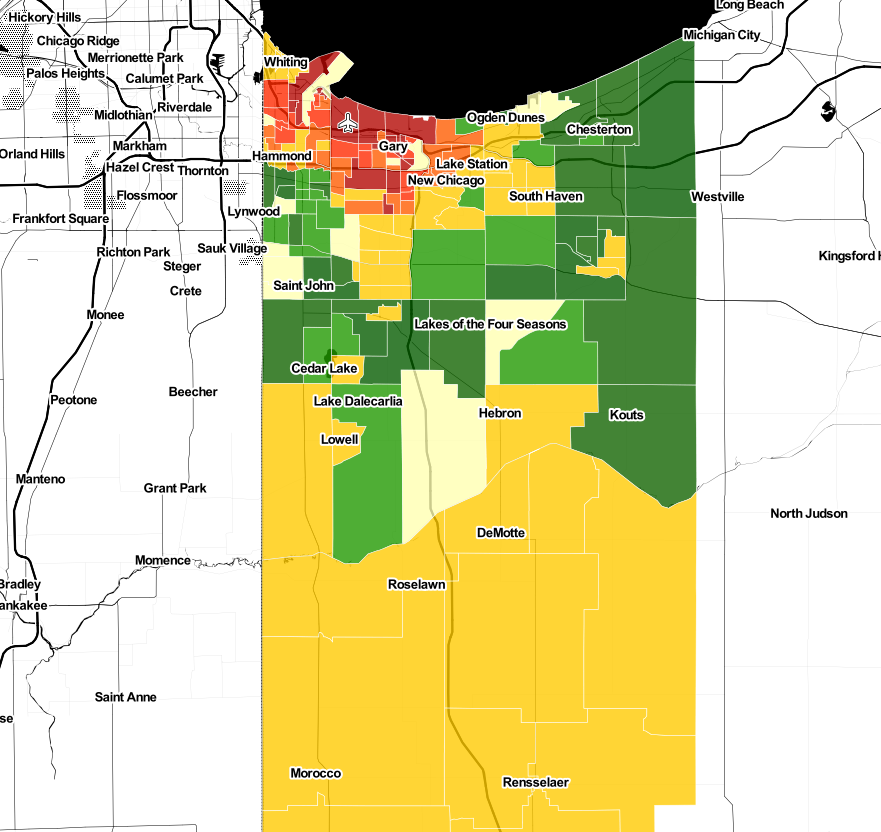 Ready to invest in the Gary housing market? If you haven't already done so, create your free Roofstock account and set up alerts. We'll notify you when we have a Gary investment property that matches your search criteria.

The Fastest Growing Real Estate Markets To Watch in 2020

Why Investors Are Flocking to Huntsville's Real Estate Market in 2020

States Without Property Tax in 2020? No, But Here Are The Best & Worst