Demand for real estate and rental property in Huntsville is so strong that there’s less than a four-week supply of housing inventory listed for sale today (as of April 2022). That’s the lowest the housing supply has been in Huntsville over the past 22 years.

Developers in the Huntsville metro area simply haven’t been able to keep up with demand. A low supply of housing helps to explain why rent rates in the city grew by 18% last year and why one major financial publication ranks Huntsville among the top cities worth your investment dollars.

Huntsville is located in the Tennessee River Valley in the northernmost part of Alabama. It’s the most populous city in Alabama and part of the 2nd most populated metropolitan area in the state.

The economy of Huntsville is driven by a dynamic mix of private and public industry sectors including aerospace, defense, technology, and education. As an extra bonus for rental property investors, Alabama A&M and the University of Alabama in Huntsville supply a steady stream of students looking for off-campus housing paid for by their parents.

The strong job and population growth of Huntsville combined with a low cost of living and a high quality of life help explain why the Huntsville real estate market will likely continue to be a good investment in 2022.

The Huntsville Real-Time News describes Huntsville as Alabama’s juggernaut city. But there's a lot more behind the steady 10-year rise in population than first meets the eye.

The city has its first $1 million housing district, where average home sales have at least nine figures. At the same time, commercial development projects such as the Facebook data center and the $1.6 billion Mazda Toyota USA Manufacturing facility attract more people to the area looking for – and finding - well-paying jobs.

Prior to the pandemic, more jobs were heading to Huntsville, making a positive impact on the housing market here, according to TV station WAFF. Today, Huntsville is back on track, boasting an annual job growth of 3.1% and an unemployment rate of just 1.6%.

Even better, billions of dollars of economic growth are still in the works for the metro area and are expected to bring literally thousands of new jobs to Huntsville and Northern Alabama over the next several years.

The Rocket City is exploding when it comes to rental properties, according to a recent report from WAFF. Huntsville is one of the most in-demand renter hubs in the South, with tenants attracted by the city’s affordability, slower living, and growing job opportunities. Healthy housing markets like these that are stable, affordable, fluid, and have a minimal risk of loss. Those factors are important for homeowners, tenants, and rental property investors.

Remote real estate investors thinking about buying a rental property in Huntsville may not want to wait too long. The Alabama Center for Real Estate (ACRE) reports that the median sales price for homes in Huntsville-Madison County have increased by 18% year-over-year, and there is less than a 1 month supply of homes on the market.

This means that the housing market in Huntsville strongly favors sellers. As the National Association of Realtors (NAR) notes, a six month supply of homes indicates a relatively balanced market, while any supply less than six months tends to push prices up more rapidly.

Huntsville is ranked as the 10th hottest rental market in the country, according to RENTCafé, with 12 prospective renters for every available place. The city boasts an occupancy rate of 97%, and vacancies are filled in an average of 27 days. There’s more demand for rental property in Huntsville than there is supply, which is why rent for a 3-bedroom home has increased by 18% over the past year.

Rent growth is one reason why Real Wealth lists Huntsville as one of the best places to buy rental property in 2022 for cash flow and appreciation. Strong job growth combined with affordable home prices have driven equity growth up by nearly 24%, which is 22% higher than the national average.

The rental market in Huntsville also has a high price-to-rent ratio driven by the shortage of housing and the demand for off campus housing from students attending Alabama A&M and The University of Alabama in Huntsville.

One of the biggest challenges of investing in rental property is to find markets where the demand from tenants is strong and where home prices have a steady and relatively predictable increase.

To help home buyers and investors forecast the likelihood of future housing price increases Freddie Mac publishes a monthly report of the historic change in home prices for all markets in the U.S. The most recent Freddie Mac House Price Index (FMHPI) report for the Huntsville MSA shows:

However, in addition to price, factors such as demographics, lifestyle choices and available inventory also influence the demand for rental property. That helps to explain why in markets such as Huntsville where housing is relatively affordable, there are still a large percentage of renter-occupied households.

The Alabama Housing Affordability Index (AHAI) from the Alabama Center for Real Estate uses 100 as a baseline affordability index number. The greater a market’s HAI is above 100, the more affordable a market is, everything else being equal.

Based on the most recent AHAI report, the HAI for the Huntsville MSA was 180 in the 1st quarter of 2021. This means that families here have a little less than twice the median income needed to purchase a median priced, single-family resale home in the Huntsville metro area.

Huntsville is one of those hidden gems that almost seem too good to be true.

The city offers the best amenities of big city life with a distinctive small town charm. Residents of Huntsville brag about being nerdy - and who can blame them, when such a large percentage of the people here hold engineering jobs with NASA and the U.S. Army Redstone Arsenal.

Where to begin your search? Roofstock created a heat map of Huntsville based on our Neighborhood Rating, a dynamic algorithm that enables you to make informed investment decisions by measuring school district quality, home values, employment rates, income levels and other vital investment criteria. 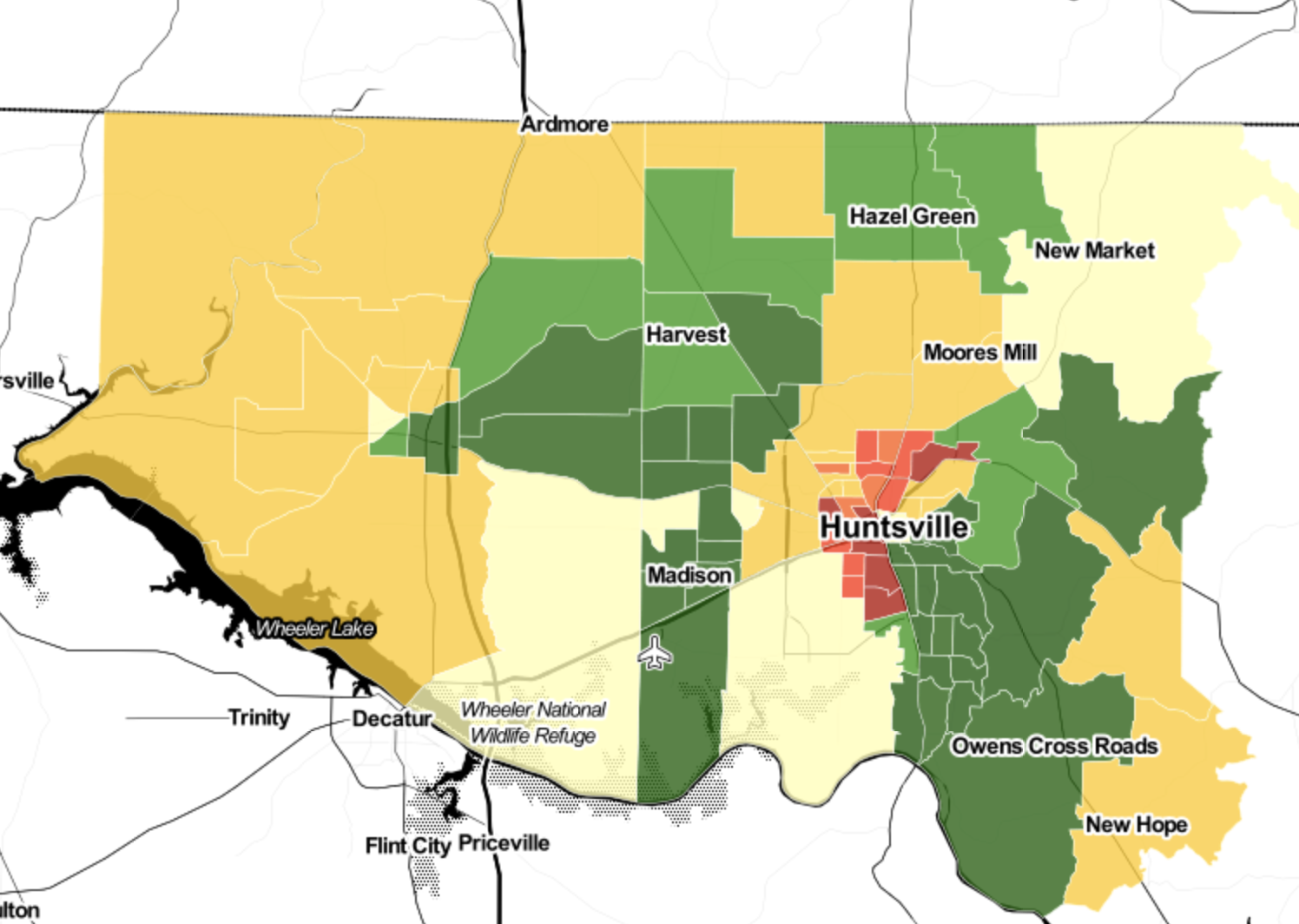 Ready to invest in the Huntsville housing market? If you haven't already done so, create your free Roofstock account and set up alerts. We'll notify you when we have a Huntsville investment property that matches your search criteria.