Hudson County, where Jersey City is located, is ranked as one of the top hottest housing markets in New Jersey to watch as demand continues to zoom. Not every New York City resident can move to Florida, so living in Jersey City is the next best thing.

Property and rents are more affordable than in NYC. Homes with off street parking, open space, and an extra room for working from home are overwhelmed with appointments and offers.

Although property prices and rents do keep rising, this urban area across the Hudson River from New York City is still much more affordable than living in the Big Apple. The City is a great market for rental property owners, with a growing percentage of the residents in Jersey City renting rather than owning.

Jersey City is part of the New York City metropolitan area and borders the Hudson River, Upper New York Bay, and Newark Bay. The economy is driven by a variety of business sectors including transportation and distribution, manufacturing, retail, and financial services. In fact, Jersey City has been nicknamed “Wall Street West” and is home to one of the largest banking centers in the country.

Here’s what investors should know about the Jersey City real estate market in 2022.

The population of Jersey City jumped by more than 18% over the last decade, making the city the 2nd largest in the state.

Jersey City is ranked among the best cities for jobs by WalletHub, based on a variety of key indicators such as job opportunities, employment growth, starting salaries, industry variety, and job security. Employment sectors in Jersey City showing the fastest signs of growth include professional and business services, education and health services, leisure and hospitality, and government jobs.

WalletHub ranks Jersey City among the top markets for buying real estate based on 24 key criteria such as strength of the economy, job growth, median home-price appreciation, and sales turnover.

People from New York City are migrating to the real estate market here for more value and relatively lower rents while still having access to the Big Apple. The Jersey Journal notes that Jersey City and Hudson County are proving to be a haven for renters working from home and looking for more space.

Jersey City is one of the best cities for renters, with the area receiving high ratings from WalletHub for the rental market and affordability, along with a great quality of life.

Patch.com reports that demand for rental property in Jersey City is creating a landlord’s market, with owners having the power to set prices higher with little room for negotiation. Although the number of individual home sales has declined, the median price of real estate deals increased throughout all of Jersey City.

More than 70% of the households in Jersey City are renter occupied, even though the City is the 5th most expensive small city to rent in. Two of the reasons why there are so many renters in Jersey City is the high cost of buying property and the fact that although rents are high here, they’re still lower than nearby Manhattan and Hoboken.

Analyzing the historic change in real estate prices in a market can help investors predict the potential future appreciation of property. Housing affordability is a metric used to estimate the current and future demand for rental property, because in markets where housing isn’t affordable, more people will generally rent than own, as is the case in Jersey City.

Each quarter the FHFA releases up-to-date data on the change in home prices for all markets across the U.S. The most recent FHFA 2022 Q1 House Price Index report for the New York-Jersey City-White Plains, NY-NJ MSA shows:

According to the most recent data, the HAI for Jersey City is 87. This means that buying a median priced home is less affordable for residents with a median household income, which could be a sign of a strong demand for rental housing in Jersey City and Hudson County and the surrounding area.

Where to begin your search? Roofstock created a heat map of Jersey City based on our Neighborhood Rating, a dynamic algorithm that enables you to make informed investment decisions by measuring school district quality, home values, employment rates, income levels and other vital investment criteria. 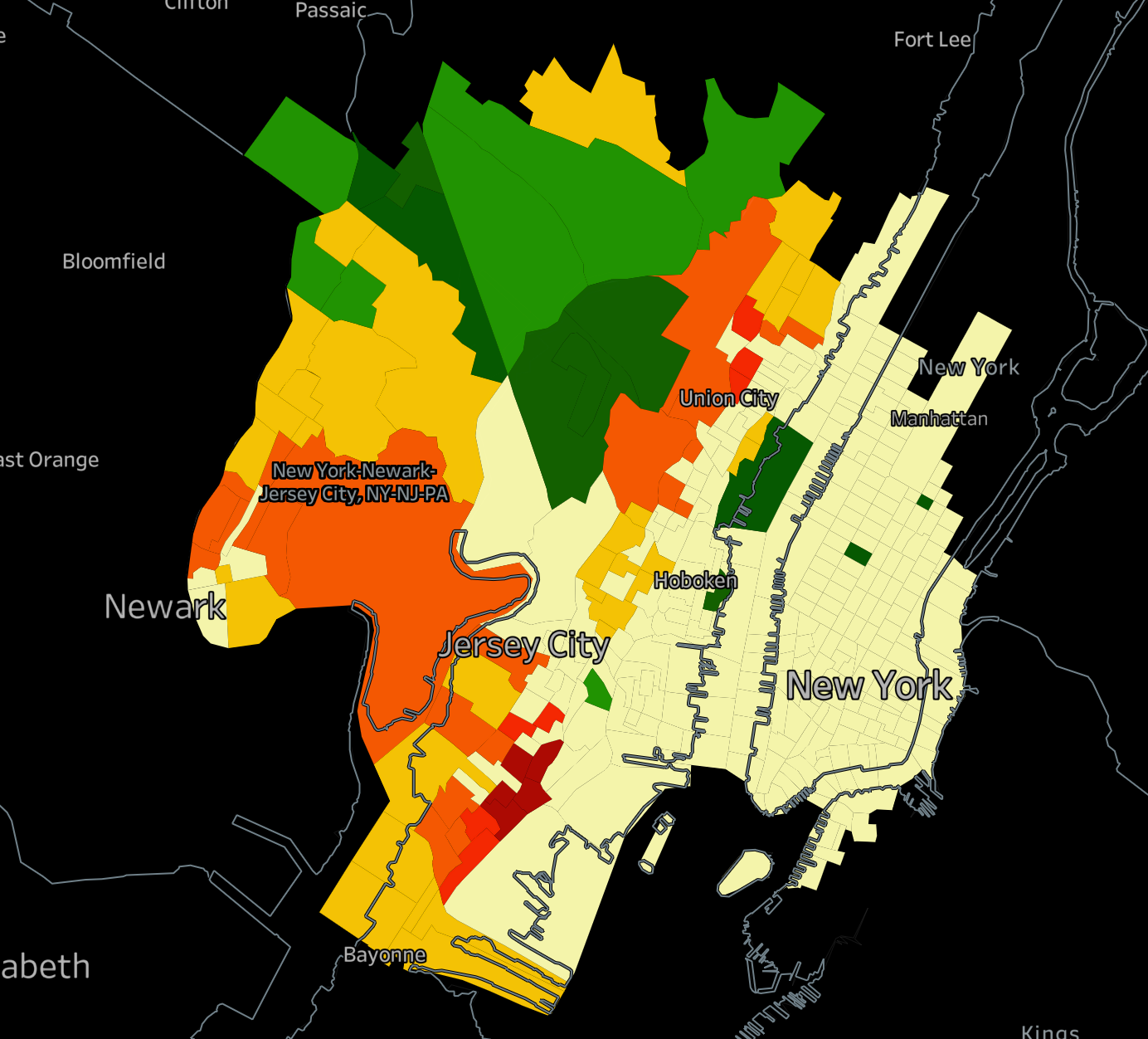 Ready to invest in the Jersey City housing market? If you haven't already done so, create your free Roofstock account and set up alerts. We'll notify you when we have a Jersey City investment property that matches your search criteria.