According to an agent interviewed by NBC 12, there are “way too many buyers and not enough sellers” in Richmond, with some buyers paying for seller closing costs and paying anywhere from $40K to $160K over the asking price.

The city continues to be a seller’s market, with nice property at a decent price point generating multiple offers, and single-family homes under $400K are extremely difficult to find.

Richmond is the capital of Virginia and the 3rd-most populous metropolitan area in the state. Nicknamed the “River City”, Richmond was originally founded as a trading center in 1609 by English colonists and played a key role in the Revolutionary War and the American Civil War.

Today, Richmond has a thriving diverse economy driven by the financial, law, and government sectors. One of 13 Federal Reserve Banks and a U.S. Court of Appeals are located in Richmond.

The Richmond region has a well-deserved reputation as a great place to live, start a business, and grow a career. The city was recently rated as one of the best small cities in North America. Atlantic beaches, the Blue Ridge Mountains, and Washington D.C. are all within a two-hour drive of Richmond, Virginia.

Keep reading to learn why investors are considering the Richmond real estate market in 2022.

An average of 32 people each and every day have moved to Greater Richmond over the past 10 years, boosting the metro population from 1.2 million in 2010 to more than 1.3 million today. The City of Richmond itself added more than 22,000 new residents over the last decade, with a population growth rate of nearly 11%. 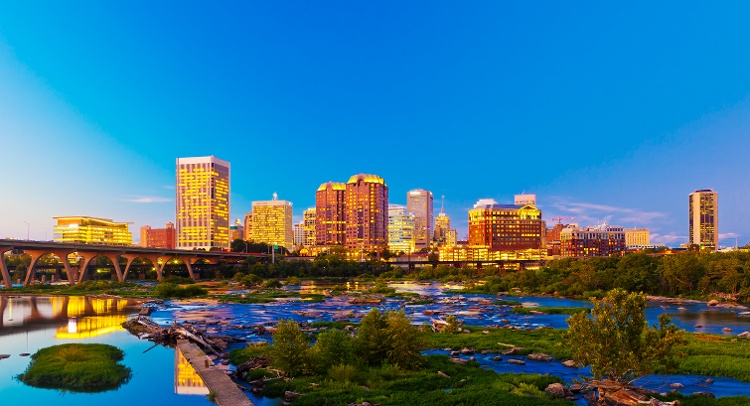 Downtown Richmond is home to over half of the jobs in the city, and has driven job growth over the past 20 years.

While downtown has a significant economic impact on the region, job growth in the suburbs is equally impressive. As Richmond.com recently reported, the job market in suburbs such as Midlothian and Lakeside are growing as well as more businesses and people move to Richmond.

Richmond – also known as the “River City” – has been described as flowing with job opportunities, according to one local news station. The city recently ranked as the 69th-best place to find a job in the U.S. this year and is one of the five best cities in Virginia for employment.

Homes in the Richmond metro area have spent an average of 6 days on the market since July 2020 before going under contract. According to the father-in-law of a buyer interviewed by The Washington Post, “They list it on Thursday, have an open house on Saturday, and it’s under contract on Monday.”

As with many other real estate markets in Virginia, the reason for rising prices is that there’s simply not enough supply to meet the growing demand for property in the Richmond metropolitan area.

Rents in metropolitan Richmond surged during the pandemic and show no sign of slowing down. In fact, rents have increased by 22% in two years. As one local real estate interviewed by 6 News Richmond observes, rising rents in Richmond are due to supply and demand, with more people moving to the city and the surrounding counties than ever before.

Even though Richmond is in the middle of a strong seller’s market, many homeowners are deciding to keep what they have and rent instead. As one suburban Richmond newspaper recently reported, people are becoming real estate investors instead by turning their homes into rental property that cash flows, so “they don’t have the need or desire to sell that property.”

Tracking the change in housing prices and monitoring the housing affordability index are two statistics real estate investors can use to forecast the potential performance of income property.

Every month Freddie Mac publishes a house price index (FMHPI) that measures the change in home prices for real estate markets in the U.S. The report assigns December 2000 with a benchmark of 100 and then compares the monthly change in housing prices in each state and metro area to 100.

The most recent FMHPI from Freddie Mac for the Richmond housing market shows:

Housing affordability is another metric real estate investors use to help decide how good a market is for rental property.

As a rule of thumb, markets where it is more expensive to buy a house – such as Richmond - usually see a higher percentage of renters.

Richmond is ranked by U.S. News & World Report as among the best places to live and retire in the country. The Richmond metro area receives high ratings for value, desirability, job market, and overall quality of life.

Where to begin your search? Roofstock created a heat map of Richmond based on our Neighborhood Rating, a dynamic algorithm that enables you to make informed investment decisions by measuring school district quality, home values, employment rates, income levels, and other vital investment criteria.

Ready to invest in the Richmond housing market? If you haven't already done so, create your free Roofstock account and set up alerts. We'll notify you when we have a Richmond, Virginia investment property that matches your search criteria.