San Antonio is ranked by the National Association of Realtors (NAR) as one of the top 10 “hidden gem” housing markets for 2022.

Despite the fact that single-family home prices in San Antonio are up about 16% year-over-year, and the average home price exceeded $393,000 for the first time ever, the NAR believes prices are still undervalued relative to underlying market fundamentals.

San Antonio has also been ranked as one of the most stable markets for rental activity in the nation, according to a 2020 year-end report from RENTCafé. As home sales continue to surge in San Antonio, prices are rising and inventory is tightening making rental property in San Antonio an increasingly popular investment.

Located in South Central Texas, San Antonio is about a one hour drive from Austin and three hours from Houston. Originally founded as a Spanish colonial outpost back in 1718 and home to The Alamo, the city has rapidly grown over the past few decades.

San Antonio sits at the southwestern corner of the Texas Triangle, an urban megaregion consisting of the San Antonio, Austin, and New Braunfels metropolitan areas. The economy in the region is as diverse as the city is old, with the manufacturing, military and defense, health care, financial services, and oil and gas sectors helping to keep job growth strong and rental property in demand.

Here’s what investors should know about the San Antonio real estate market in 2022.

San Antonio is one of the top 10 major metros with the biggest population gains between 2010 and 2020. According to Culture Map San Antonio, the metropolitan area ranks #7 in terms of population growth over the past decade, just behind Austin, Houston, and Dallas-Fort Worth.

The truth is that the Alamo City has been booming for quite some time. As local news station KENS 5 reported back in 2020, people from all over the country are moving to San Antonio, attracted by the area’s low tax rates and low cost of living. In fact, an average of 66 people are moving to the metropolitan area each day, which is why San Antonio is one of the fastest-growing cities in the U.S.

San Antonio is becoming known as a center for high-tech employment, with tech force migration into the metro area increasing by 24% year over year. Over the past several years, San Antonio has focused on supporting the growth and development of the regional tech center. Today, nearly 47% of the high-wage jobs in the economic development pipeline are in the IT and cyber operations sectors.

As the Federal Reserve Bank of Dallas notes, economic indicators in San Antonio are largely positive. The business cycle index accelerated, jobs are being added at a steady pace, and unemployment is lower than in Texas overall. 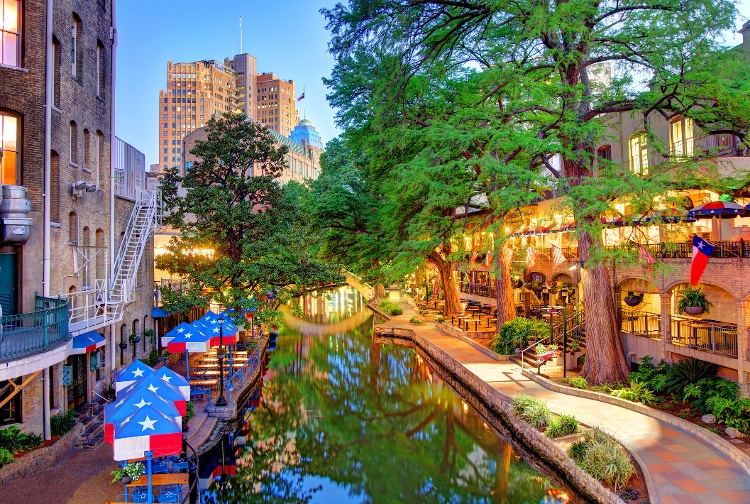 The San Antonio real estate market is predicted to outperform other Texas cities in 2022, with home prices predicted to rise by 3.5% by year-end. A couple of years ago, Curbed listed San Antonio as one of the top 5 cities where homes could make a good investment in 2020.

Twenty four months later, it looks like Curbed’s prediction of the San Antonio real estate market outperforming was right on target. According to the San Antonio Board of Realtors (SABOR), the median price of a single-family home in San Antonio increased by 16% over the past year (as of May 2022) while the days on market is down to 27 vs. 34 the same time last year.

Rent prices are rising in San Antonio, with median rent for a 3-bedroom home increasing by 12% year-over-year. According to MYSA, rent hikes are due to a combination of factors, including relocation within the city, in-migration from other parts of Texas and the U.S., and a low supply of inventory.

San Antonio is known as one of the most stable markets for rental activity in the U.S., according to the San Antonio Business Journal. About 60% of the rental applications came from renters moving from somewhere else within the city.

Strong performance of the rental market in San Antonio is one reason why WalletHub ranks San Antonio as one of the best cities for renters. The report analyzed more than 180 rental markets using the same key measures real estate investors use, including activity in the real estate market, cost of living, and growth in the job market.

Long-term real estate investors look for property that appreciates in value over time while generating consistent cash flow during the holding period.

Analyzing the historic change in housing prices can provide an indication of potential future value increases, while the affordability of housing is one indicator of the demand for rental property.

Each month Freddie Mac releases up-to-date data on the change in home prices for all markets across the U.S. The most recent Freddie Mac House Price Index (FMHPI) report for the San Antonio-New Braunfels, TX MSA shows:

The Housing Affordability Index (HAI) report is used to rank each market in the U.S. compared to a baseline HAI of 100.

In markets where housing is unaffordable, the index may be near 100 or even less than 100. On the flip side, the higher a HAI is above 100, the more affordable a market is to purchase a home. When compiling the affordability index scores, researchers look at the median price of a single-family resale home and compare that cost to the median family income in the market.

The most recent HAI for the San Antonio-New Braunfels MSA is 135 as of July 2021. This means that the families in the market buying a home have a little more than 1.3X the median income needed to purchase a median priced, single-family resale home in the San Antonio metro area. Investors can opt to look for a hard money lender in San Antonio too.

San Antonio is the place to be inspired, curious, hungry, and adventurous. The city is home to The Alamo, the San Antonio River Walk meanders through five miles of Downtown San Antonio, and SeaWorld and Six Flags Fiesta Texas are just a short car drive north of the city.

Where to begin your search? Roofstock created a heat map of San Antonio based on our Neighborhood Rating, a dynamic algorithm that enables you to make informed investment decisions by measuring school district quality, home values, employment rates, income levels and other vital investment criteria. 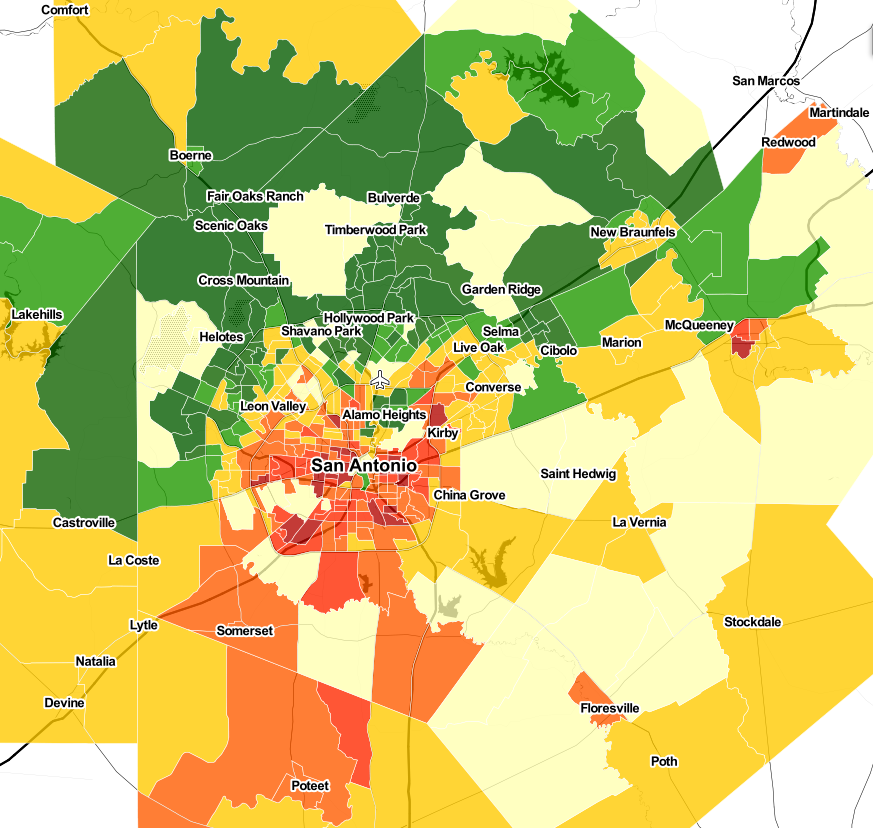 Ready to invest in the San Antonio housing market? If you haven't already done so, create your free Roofstock account and set up alerts. We'll notify you when we have a San Antonio investment property that matches your search criteria.