The St. Louis real estate market is grappling with a lack of housing inventory, pushing median sales prices up month after month and inventory down to near all-time lows. A shortage of homes to buy in St. Louis is one reason that the market ranks as one of the best for rental property, with more than half of the households in St. Louis occupied by renters.

Nestled on the banks of the Mighty Mississippi River, just below its confluence with the Missouri River, sits the vibrant and storied Gateway to the West, St. Louis.

Known for beer, barbecue, and the Blues, this town boasts the kind of appeal that makes it an ideal real estate investment market.

With a growing population working in the tech and creative sectors, and anchored by established brands like Anheuser-Busch, Boeing, and Emerson Electric, St. Louis seamlessly blends the new economy with powerhouse Fortune 500 entities. All of those companies translate into a highly skilled and educated workforce with money to spend.

We’ve put together your guide to the St. Louis real estate market, including both the current investment scene and future potential over the next year.

The St. Louis region grew by only 1.2% over the past 10 years. Over the last few years, people priced out of bigger cities have been moving to St. Louis where prices are affordable and the quality of life is considered great.

Although the rate of employment in the state is slowing, job growth in St. Louis is still going up. The job market in St. Louis grew by nearly 0.02% last year, according to Data USA. The U.S. Bureau of Labor Statistics (BLS) reports that (as of April 2022) unemployment in the St. Louis MSA is down to just 2.9% with most employment sectors on the rebound.

Now might be a good time to buy a home in St. Louis with some “normalcy,” according to report from KSDK TV. As one local real estate expert notes, a property that may have had 30 offers last year might have 6 today. While activity is slowing down somewhat, buyers should still be prepared to act quickly.

St. Louis is one of the best 100 cities for renters, according to recent research from WalletHub. The report analyzes the same key criteria real estate investors use, including activity in the rental market, job and population growth, and the preference of households to rent rather than own. In fact, more than half of the household units in St. Louis are occupied by renters.

Two key data sets experienced real estate investors use to predict the potential demand for rental property in St. Louis are the historic price changes and the affordability of housing in the metropolitan area.

The most recent FMHPI from Freddie for the St. Louis, MO – IL MSA reveals:

Where to begin your search? Roofstock created a heat map of St. Louis based on our Neighborhood Rating, a dynamic algorithm that enables you to make informed investment decisions by measuring school district quality, home values, employment rates, income levels and other vital investment criteria. 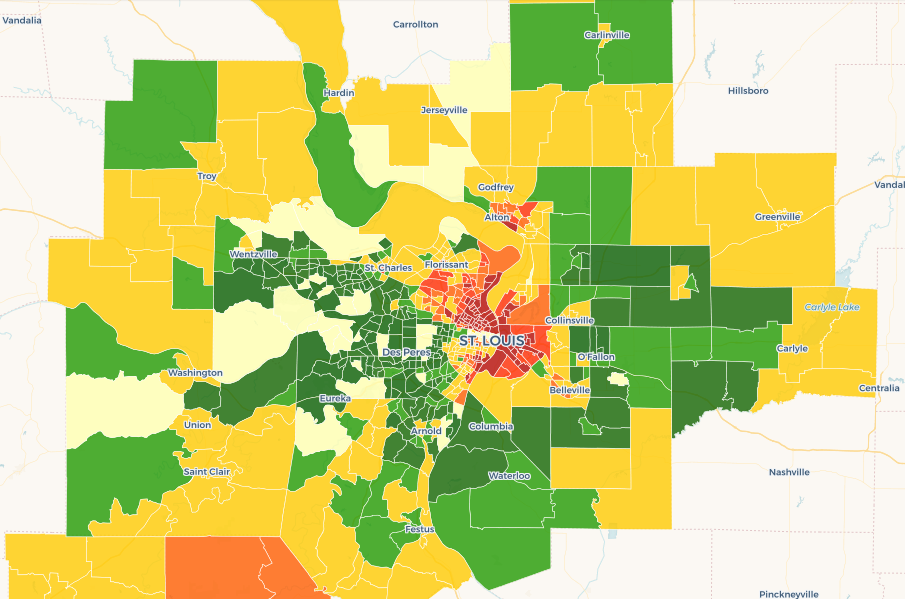 Ready to invest in the St. Louis housing market? If you haven't already done so, create your free Roofstock account and set up alerts. We'll notify you when we have a St. Louis investment property that matches your search criteria.