Athens is ranked as the best real estate market in Georgia by WalletHub, based on key investment metrics such as home value forecast, ratio of rent to sale price, and vacancy rate.

That’s one of the reasons why home values are getting hotter in Athens. Over the past year, the value of a typical home in Athens has increased by 27.3% while rents for a 3-bedroom place have grown by 14%, according to Zillow and Zumper.

Athens is about a one hour drive from Downtown Atlanta, and is part of the Athens-Clarke County MSA and home to the University of Georgia, the state’s renowned public university and research center. Established and new technology startups help drive the economy, along with biotechnology firms and manufacturing, and the tourism industry.

The city is also known as the birthplace of several well-known alternative rock and new wave performers such as R.E.M., The B-52s, Indigo Girls, and Matthew Sweet. Climate in Athens is similar to much of Georgia and the Southeastern U.S., with hot and humid summers and short, cool winters.

Here’s more of what investors need to know about investing in Athens, Georgia in 2022.

Athens-Clarke County is ranked by WalletHub as one of the fastest-growing areas in the U.S. The firm analyzed 17 key measures of growth and decline for 515 cities in the country, reviewing data sets such as population growth, unemployment rate decrease, and growth in regional GDP. Athens has a higher growth rate than cities such as Columbus and Albany, Georgia, and Springfield, Illinois.

Employment growth in Athens-Clarke County was 4.8% over the last year (April 2021 vs April 2022). The BLS reports that industry sectors showing the fastest growth include leisure and hospitality, trade and transportation, professional and business services, and government.

There’s limited land in Athens where new single-family and multifamily housing can be built, which is one of the reasons why real estate prices in Athens keep rising.

Although tiny Athens, Georgia is only about 118 square miles in size, the city boasts a population density of over 850 people per square mile. A second reason why home prices keep going up is that Athens is a college town, and students from the University of Georgia have the luxury of using their parents’ money to pay for off-campus housing.

The mayor-elect in Athens recently observed that there has been a lack of focus from developers on workforce housing, creating a supply shortage. Also driving the rental market in Athens are students from the nearby University of Georgia who often opt for renting two-to-four bedroom houses rather than living on-campus.

Analyzing historic home price changes and the affordability of housing in a market are two ways that real estate investors can forecast the current and potential future demand for rental property.

When researching price change data, one good resource to use is the Freddie Mac House Price Index report. The most recent monthly FMHPI released for the Athens-Clarke County MSA reveals:

Tracking the affordability of housing in a market can also offer an idea of how many people will choose to rent rather than own.

The Housing Affordability Index (HAI) compares median family incomes to prices of median resale single-family homes. Of course, other factors may cause people to rent rather than own, such as lifestyle choices or a short supply of available housing.

HAIs use 100 as a baseline index number. The greater the affordability index is above 100, the more affordable a market is, and vice versa.

Based on the most recent HAI data through July 2021, the housing affordability index in Athens is 117. This means that Athens is one of the less affordable places in Georgia to own a home, which could indicate a strong demand for rental housing in Athens.

Athens is ranked by Niche.com as the 4th best place to live in Georgia, receiving top grades for nightlife, outdoor activities, and public schools with a cost of living that’s 13% below the national average. The city is known for great music, fantastic food, and the Georgia Bulldogs.

Where to begin your search? Roofstock created a heat map of Athens based on our Neighborhood Rating, a dynamic algorithm that enables you to make informed investment decisions by measuring school district quality, home values, employment rates, income levels and other vital investment criteria. 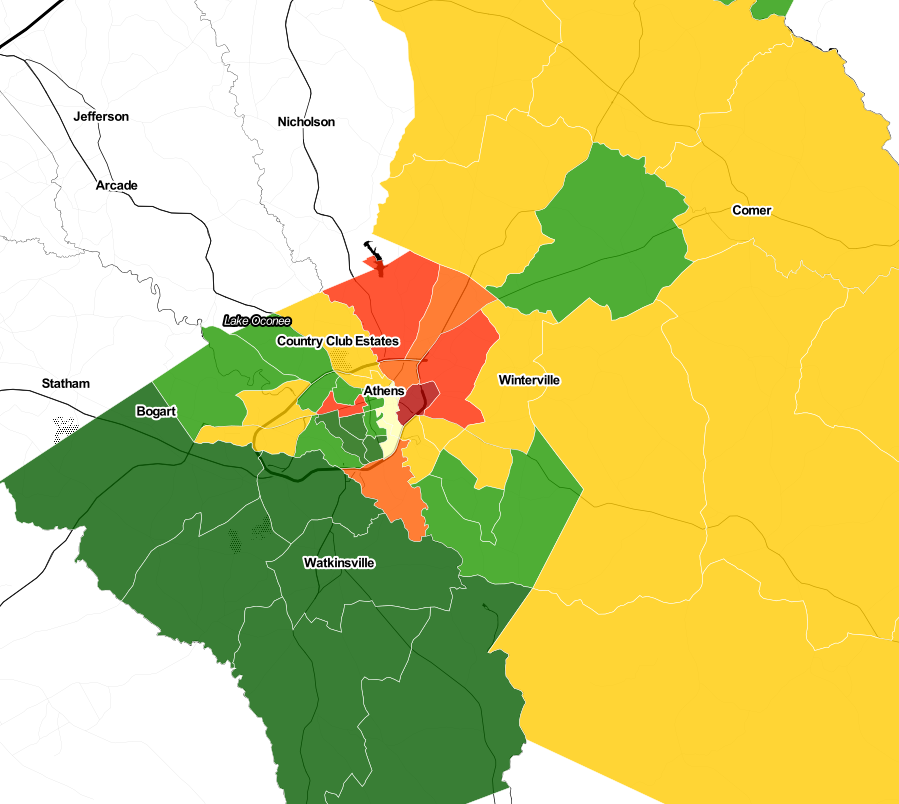 Ready to invest in the Athens housing market? If you haven't already done so, create your free Roofstock account and set up alerts. We'll notify you when we have an Athens investment property that matches your search criteria.