The real estate market in Cleveland is competitive, with some homes going under contract the same day they are listed. One reason homes are selling quickly in Cleveland is that prices here are still very affordable, with the median listing price for a home in Cleveland only $115,000.

The diversified economy helps keep the rental market strong in Cleveland. For a city that once relied on the manufacturing industry for growth, Cleveland has done a remarkable job of transforming its economy into a well-balanced blend of service, high tech, blue and white collar employment.

Located along the southern shore of Lake Erie, Cleveland is just across from the Canadian border. The metro area is home to the Rock and Roll Hall of Fame, one of the world’s finest orchestras, and major professional baseball, football, and basketball teams.

Here’s why Cleveland could be a great place to invest in rental property in 2022.

Let's take a look at some of the population data for Cleveland:

The unemployment rate in Cleveland is down to just 5.5% (as of April 2022), according to the U.S. Bureau of Labor Statistics (BLS). As the economy in Cleveland continues to recover, job sectors showing the fastest signs of growth include construction, trade and transportation, professional and business services, and leisure and hospitality.

While job growth in Cleveland has historically lagged behind some of the city’s peers, a recent report in Cleveland.com notes that per capita GDP in Cleveland surpassed Sun Belt metros such as Phoenix, San Antonio, and Las Vegas.

The renewed focus on space exploration is good news for the fuel cell industry and the NASA Glenn Research Center in Cleveland. Companies with corporate headquarters in Cleveland include Applied Industrial Technologies, Cliffs Natural Resources, and Sherwin-Williams Company. The Federal Reserve Bank of Cleveland, one of only 12 Reserve Banks in the U.S., is in downtown Cleveland.

Cleveland is ranked as the #1 best city in America to buy a home by Money Crashers, based on relative prices compared to regional and national averages, and prospects for further appreciation. The affordability of single-family homes in Cleveland is especially appealing to remote real estate investors and to people working from home.

Successful real estate investors know how to make money in any market cycle, which is one reason people are investing in Cleveland rental property. Cleveland is one of the most recession-resistant markets in the U.S., according to Crain’s Cleveland Business.

When measured by the investment variables of home price volatility, home sales flips, average loan-to-value, and home price-to-income ratio, Cleveland ranks as one of the top four markets with the lowest risk of a real estate dip.

Demand for housing in Cleveland is high and inventory is low, with the average home price up to $236,873, according to the April 2022 report for Cuyahoga County from the Akron Cleveland Association of Realtors. Buyer in the metro area need to act quickly, with the inventory of available homes down to just a 1.3 month supply and the number of active listings down nearly 7.9% year over year.

Rising home prices in Cleveland are helping to create a strong demand for single-family rental property, with over half of the housing units occupied by renters. Along with Cincinnati and Dayton, rental property in Cleveland can provide investors with cash flow combined with solid appreciation over the long term.

Reviewing historic price changes and affordability are two methods real estate investors use to decide whether or not to invest in a specific area. Short- and long-term price changes help guide investment strategy, while affordability is one way to gauge the potential demand for rental housing.

Using research from ATTOM Data Solutions, Kiplinger conducted a home price and affordability study of the top 100 housing markets in the U.S.:

Forbes rated the Cleveland metropolitan area as one of the best places in the U.S. for business and careers. Unemployment is down to 5.5%, household incomes are growing, and the cost of living is 11% below the national average.

Where to begin your search? Roofstock created a heat map of Cleveland based on our Neighborhood Rating, a dynamic algorithm that enables you to make informed investment decisions by measuring school district quality, home values, employment rates, income levels and other vital investment criteria. 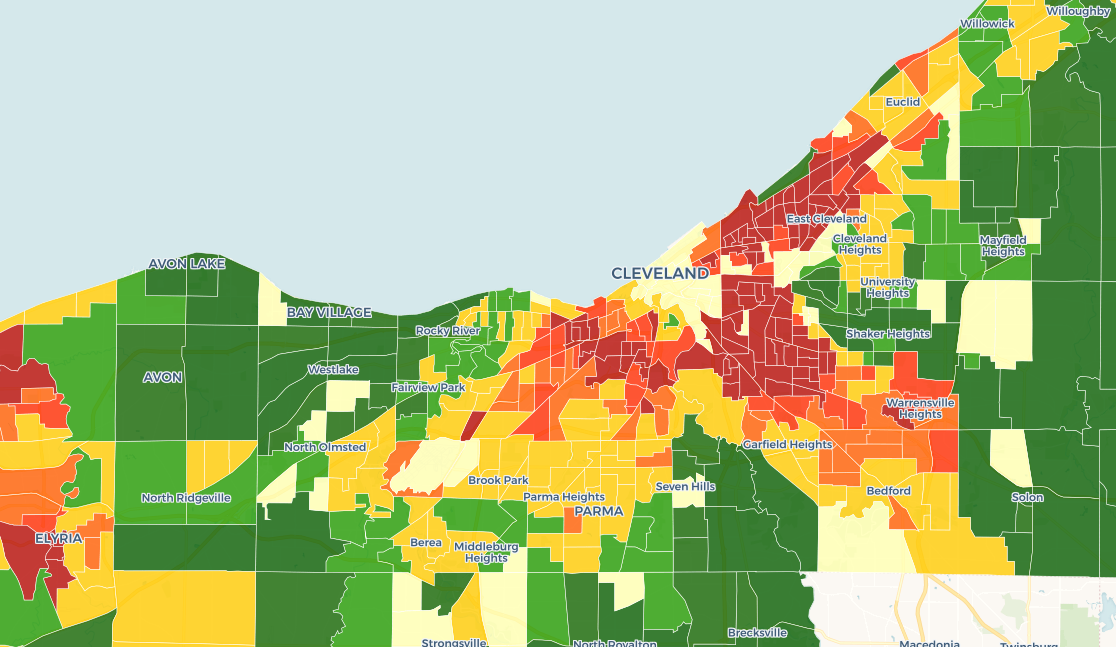 Ready to invest in the Cleveland housing market? If you haven't already done so, create your free Roofstock account and set up alerts. We'll notify you when we have a Cleveland investment property that matches your search criteria.