Even though home prices in Dayton are some of the most affordable in the nation, there still are more people in the metropolitan area who rent rather than own. Although home values in Dayton increased by more than 23% over the past year, the median listing price for a house in Dayton is just $101 per square foot.

Many popular neighborhoods in Dayton have far more renters than owners. In Downtown Dayton and Webster Station, for example, over 80% of households are occupied by renters. Over the past 3 years, rent prices for 3-bedroom properties in Dayton have increased by nearly 18%.

Here are 15 Dayton neighborhoods in which to consider purchasing investment property, including several areas where home prices are below $100K.

Why invest in Dayton?

Although the population of the city has slightly declined over the past 10 years, many suburbs around Dayton have added thousands of new residents, according to the Dayton Daily News. The economy of metropolitan Dayton is also growing, with unemployment down to just 4.4% (Bureau of Labor Statistics, January 2022).

Even though median home price in Dayton is only $115,000, the metro area has more renters than homeowners. In fact, some neighborhoods in the city, including Downtown Dayton and the Oregon Historic District, have more than 80% of homes occupied by renters.

Over the past year, the value of a middle-price-tier home in Dayton has increased by 23.4% (Zillow through February 2022). Rent prices in the metropolitan area are also on the rise. According to Zumper, median rents for 3-bedroom properties have increased by 8% year over year. 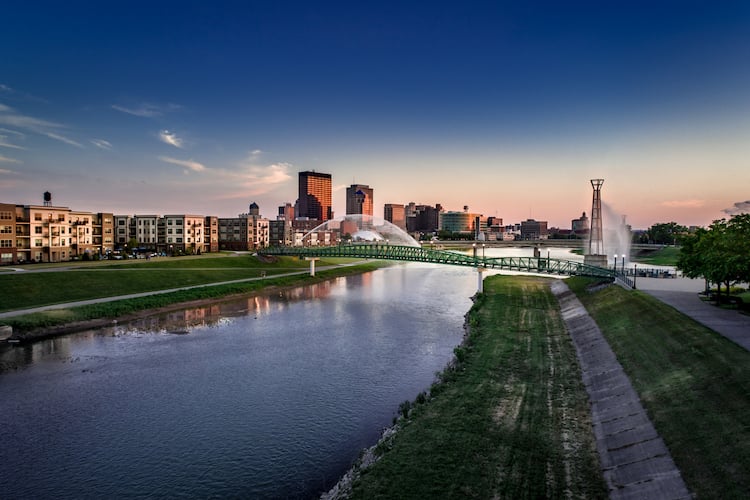 Dayton is home to over 60 unique neighborhoods, even though the city is only about 50 square miles in size. Home prices range from $10K to $2.2M, offering a wide range of potential opportunities for investing in rental property.

Here are 15 neighborhoods in Dayton to consider, based on data from:

Nearly 90% of residents in Downtown Dayton rent their homes, making the neighborhood a good place to begin looking for rental property. The area is bordered by the Miami River and the Webster Station and Oregon neighborhoods, and it has an urban feel with a lot of dining and entertainment options:

Webster Station is another neighborhood in Dayton where most residents rent their homes. Located immediately east of Downtown, Webster Station has an urban feel and is just across the Mad River from Deeds Point MetroPark:

Niche.com ranks South Park as one of the best neighborhoods to live in Dayton, and it’s another area with more renters than homeowners. South Park is located south of Downtown, near the Miami Valley Hospital and the University of Dayton:

The Oregon Historic District in Dayton is one of the oldest neighborhoods in Dayton, known for its Queen Anne, Federal, and Greek Revival architecture. Oregon is located between Webster Station and South Park, and most residents rent their homes:

Shroyer Park is ranked as the best neighborhood to live in Dayton by Niche.com, and it’s a popular area for renters. Shroyer Park is immediately southeast of the University of Dayton, just north of the Patterson Park neighborhood, and has an urban-suburban feel:

Five Oaks is located across the Miami River from Downtown Dayton, adjacent to Grafton Hill. Five Oaks has an urban-suburban feel, a lot of restaurants and coffee shops, and more renters than homeowners:

Grafton Hill is a neighborhood with a dense urban feel and a large percentage of renter-occupied households. Grafton Hill is bordered by the Miami River, between Downtown and Five Oaks:

Niche.com ranks Patterson Park as the second-best neighborhood in Dayton. Located 4 miles south of Downtown, near the intersection of Patterson Road and Wilmington Avenue, Patterson Park has an urban-suburban feel and a lot of bars and parks:

Old Dayton View is located at the junction of Wolf Creek and the Miami River, northwest of Downtown Dayton. The neighborhood has an urban-suburban feel and more renters than homeowners:

The Twin Towers neighborhood is near the intersection of Highway 35 and Steve Whalen Boulevard, a few blocks from the University of Dayton and Miami Valley Hospital. Twin Towers has a dense suburban feel and a large percentage of renter-occupied households:

Home to the Dayton Children’s Hospital, Old North Dayton is northeast of Downtown, near Eastwood Lake. The neighborhood has a dense suburban feel, with a lot of restaurants and coffee shops, and is a popular area for renters:

Northridge Estates is 7 miles north of Downtown via I-75, near Wegerzyn Gardens MetroPark. The neighborhood has a dense suburban feel, with a lot of restaurants, bars, coffee shops, and parks:

DeWeese is immediately south of Northridge Estates, and is bordered by Triangle Park on the south and Wegerzyn Gardens MetroPark on the north. DeWeese has a sparse suburban feel, with a lot of restaurants and parks:

Walnut Hills is a few minutes from the University of Dayton. The neighborhood has a dense suburban feel, a lot of restaurants and parks, and more renters than homeowners: