The window of opportunity may be opening for investors interested in purchasing rental property in Jackson. Across the metropolitan area, median prices fell by 2.5% (April 2022) compared to the same time last year, according to the Clarion Ledger. However, home prices in the suburban counties of Rankin and Madison increased by an average of more than 5% over the same period.

Jackson is located along the Pearl River near the south-central part of the state and is the capital of Mississippi. The city is home to more than a dozen colleges and universities, a growing number of socially active professional workers, and some very affordable real estate.

The economy of Jackson is driven by the government, financial services, manufacturing, and agricultural sectors. Gospel, blues, and R&B help make Jackson famous, and the city hosts numerous cultural events each year such as the Crossroads Film Festival and the Mississippi State Fair.

Keep reading to learn more about the Jackson real estate market in 2022.

There are hundreds of job openings in Jackson, but not enough workers to fill them. As WJTV 12 News reports, some of the hottest jobs in Jackson right now are information technology, utilities, manufacturing, transportation, and tourism. While Mississippi has an unemployment rate of 4.1% (as of April 2022), unemployment in Jackson is down to just 3.3%.

In some parts of Jackson, it’s common to see 7 buyers bidding for the same property, hoping to be the lucky one, according to an article in the Northside Sun. Some of the neighborhoods in Jackson seeing the hottest action include Northside, Ridgeland, Belhaven, and Eastover. Over the past year, the median price of a middle price tier home in Jackson has increased by nearly 36%.

One of the biggest reasons investors buy rental property is because people always need a place to live. Even though some homeowners in the area may be struggling, the demand for rental property in Jackson remains strong. In fact, Jackson was recently listed as one of the smaller cities in the U.S. where rents are rising the most.

Two methods that rental property investors use to analyze markets are reviewing the historic change in housing prices and affordability. Price changes can help forecast possible equity growth over the long term, while the affordability of housing is one indicator of how strong a specific area may be for renters.

Each month Freddie Mac publishes its House Price Index (FMHPI) report with up-to-date data on the change in home prices for all markets across the U.S. The most recent FMHPI from Freddie for the Jackson MSA shows:

Housing affordability is calculated by comparing the median family income in a market to the median cost of a single-family home, as the National Association of Realtors (NAR) explains. The higher the HAI of a specific market is above 100, the more affordable it is to purchase a home.

It’s important to note that when the NAR calculates affordability, the organization assumes a buyer will use a conventional loan with 20% down to purchase an existing single-family home.

Based on the most recent information from Home Town Locator, the HAI for the Jackson MSA is 177 (as of July 2021). This means that the median family has slightly more than 1.7 times the needed income to purchase a median priced, existing single-family home with a conventional mortgage in the Jackson metropolitan area.

Jackson is described as the “City with Soul” thanks to its Southern hospitality, friendly locals, live music, and the city’s pivotal role in the civil rights movement. Newcomers to Jackson are pleasantly surprised to learn that there’s much more to the area than meets the eye.

Where to begin your search? Roofstock created a heat map of Jackson based on our Neighborhood Rating, a dynamic algorithm that enables you to make informed investment decisions by measuring school district quality, home values, employment rates, income levels and other vital investment criteria. 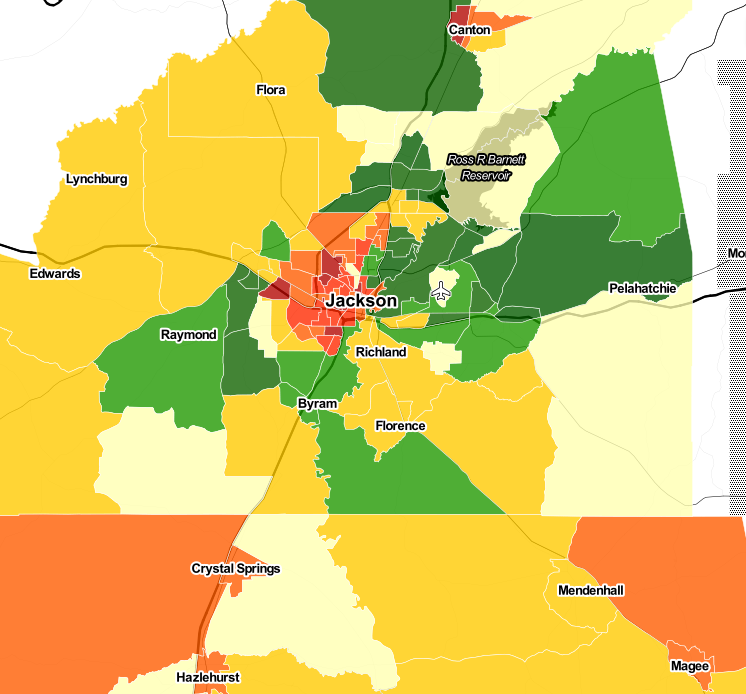 Ready to invest in the Jackson housing market? If you haven't already done so, create your free Roofstock account and set up alerts. We'll notify you when we have a Jackson investment property that matches your search criteria.