The Sun Belt runs from one side of the country to the other, encompassing 13 states and home to over 144 million residents.

Some of the fastest-growing cities are in the Sun Belt, with both residents and investors drawn to the region’s temperate climate, affordable cost of living, and often low tax rates.

Which states are in the Sun Belt?

The Sun Belt spans around the southern half of the U.S. from the Atlantic to Pacific Ocean, roughly south of the 38th parallel. While the U.S. Census Bureau doesn’t classify the Sun Belt as a Region, parts of the West and South Census Regions make up the Sun Belt.

Sun Belt states are known for their semi-desert, Mediterranean, and tropical climates, as well as the plentiful amounts of sunshine received throughout the year.

States in the Sun Belt

Largest cities in the Sun Belt 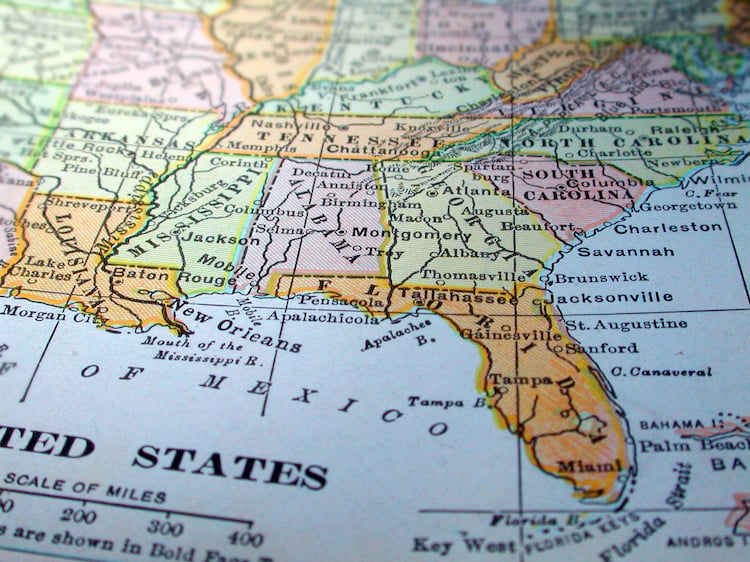 Population & economy of the Sun Belt

Over 144 million people live in the Sun Belt, with California, Texas, and Florida home to the largest populations. The most populous metro areas in the Sun Belt include Los Angeles, Dallas-Fort Worth, Houston, Miami, Atlanta, and Phoenix.

A little over 50 years ago, less than one-half of the U.S. population resided in the Sun Belt. Today, the Sun Belt comprises about 62% of the country’s population, according to the Brookings Institution.

Over the last 10 years, Sun Belt states including Utah, Idaho, Texas, North Dakota, and Nevada have seen population growth of 15% or more. In fact, the Sun Belt is home to 9 of the 10 fastest-growing cities in the United States including:

In addition to robust population growth, economic growth is another fundamental that real estate investors look for, and the Sun Belt continues to deliver. Southern and western cities in Arizona, Florida, and Utah are among the cities that have gained the most jobs since the pandemic.

Local governments and states with low property and income tax rates continue to attract both residents and employers alike. As a recent report from SmartAsset notes, millennials tend to flock to states with no income tax, such as Florida, Nevada, and Texas. In fact, these states were among those with the highest net migration of millennials in 2019.

Pro-growth Sun Belt states where the cost of living is lower than the national average are also home to some of the best cities for jobs. According to WalletHub’s recent Best Cities for Jobs report, several Sun Belt cities were ranked among the top 25 cities for finding a new or better job:

Why investors are interested in Sun Belt real estate

In addition to strong population growth and thriving economies, real estate investors like investing in the Sun Belt because real estate is relatively affordable and homes may be less expensive to maintain.

As the U.S. Development Opportunities 2021 report from CBRE Research reveals, eight of the 10 lowest-cost markets for real estate development are located in the Sun Belt:

In Orlando, for example, the market-leading population growth and retail spending are driving the demand for additional housing. But it’s not just well-known cities in the Sun Belt that are seeing strong demand for housing.

The Sun Belt is home to more than 144 million people living in 13 states, from metropolitan areas like Los Angeles and Phoenix, to smaller secondary and tertiary markets like Salt Lake City, Waco, and Huntsville.

(Data cited below came from Census Reporter, Data USA, Federal Reserve Bank of St. Louis, Realtor.com, U.S. Bureau of Labor Statistics, Zillow, and Zumper as of November/December 2021. Growth statistics are year-over-year, except for GDP which is growth over 10 years.)

Sun Belt real estate markets are home to about 62% of the U.S. population, boasting robust job growth and growing populations. Cities in the Sun Belt range from major metros like Los Angeles, to smaller secondary markets like Salt Lake City, Charlotte, and Waco, Texas. Many housing markets in the Sun Belt have seen both home prices and rents increase by double-digits year-over-year, two key metrics that every rental property investor likes to see.